Teddy Roosevelt And World War I: An Alternative History 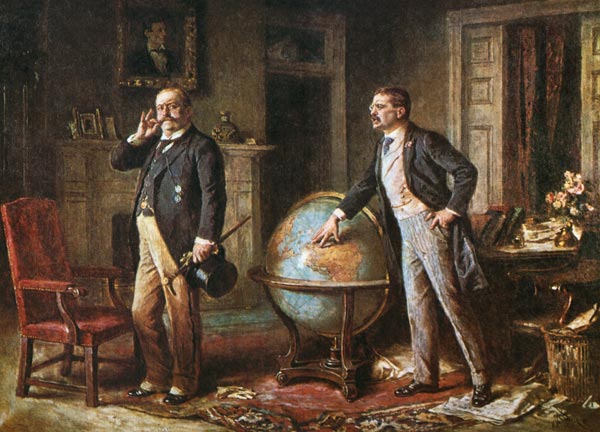 Teddy Roosevelt And World War I: An Alternative History

By: Jeff Nilsson
It’s impossible to declare precisely what would have happened had Theodore Roosevelt been re-elected in 1912. But throughout his career, he was interested in global politics and spreading American influence. There is no question that, as president in 1913, he would have taken a far different course during World War I than the one taken by Wilson. Here’s how we think it might have happened.

In this alternative history …

• America enters World War I two years earlier.
Teddy Roosevelt could never sit by and watch a fight: he either had to break it up or join in. So when the old Rough Rider hears, in 1914, that Germany has marched over neutral Belgium to attack France, he commits our resources, and then our soldiers, to the Allied cause.
• World War I ends two years sooner.
It takes almost a year to build the ships, arm the troops, train them, and land them in France. By late 1915, though, the American Expeditionary Force of 10 million soldiers is fighting alongside the French and English armies on the Western Front. Even with the wasteful tactics of the European generals, which sometimes wipe out thousands of soldiers in hours, the Allies put enough pressure on the Germans to crack their defenses. The Kaiser’s army falls back, across France, into Germany, with the Allies in pursuit. As winter begins in 1916, the Germans are asking for peace terms.
• Adolf Hitler never comes to power.
The German people see their army in retreat, and the Allied armies occupying their cities. They blame their defeat on the military adventurers who run the Kaiser’s government. When young Adolf Hitler starts proclaiming the invincibility of the German army, and the need to prepare again for war, few Germans are interested. Mostly, they’re relieved when the occupying Allied forces arrest him and keep him in a French prison. Without him, the National Socialist party withers away.
• The Communists never gain power in Russia.
Although the Russian army suffers a paralyzing defeat on the Eastern Front, it is mostly intact when the war ends and the troops march home. The German government is too busy saving itself in 1917 to send the exiled Lenin back into Russia. Without their charismatic leader, the Bolsheviks of Moscow make little progress stirring up revolution. Russian veterans happily round up the loudest revolutionaries and ship them off to Siberia. By November, when the Bolsheviks would have seized the government, they have disappeared underground.
• Europe forms a union.
Since the war ends almost two years earlier, Roosevelt is able to talk the Allies into seeking reasonable reparation costs from the Germans and their allies, the Austrians. Before he dies in office in 1918, he has convinced England, France, and Italy to a continental plan similar to that created for France after Napoleon’s defeat. Having exiled its Kaiser and become a Republic, Germany is invited to rejoin the European nations. For the next 30 years, the Congress of Paris ensures the status quo between nations and suppresses any talk of revolution or nationalism.
All these benefits wouldn’t have accrued without some problems. According to one way of looking at history, if Communism didn’t get a strong foothold in Russia, it would have done so in Germany. Japan would still have emerged as a world power and very likely would still have invaded China. If successful, Japan and the US would have very likely found themselves in conflict over control of the Pacific.
Very probably, the atom bomb would have still been developed. Given human nature, it’s very likely one country or another would have had the curiosity to use it. Which country that might have been is anyone’s guess …
Posted by Baloo at 3:16 PM