Here's a challenge for everybody. Create a timeline, starting with the 1960 election, in which the people who were nominated for President or VP in OTL were not nominated for either office by the Democrats or the Republicans up to the present. Naturally, that will mean that every President and VP since Eisenhower are different people from the ones who were in OTL.  That means Nixon was never nominated, either in 1960 or 1968 or any other year.  Ford can't be on your list because, though he didn't run for VP, but was appointed to the job by Nixon, he did run for President. On the other hand, Rockefeller, though he was VP, can be included because he was never nominated for President or for VP.

So, none of these can be on your list:

This is a reprint from the Ex-Army blog [link]. 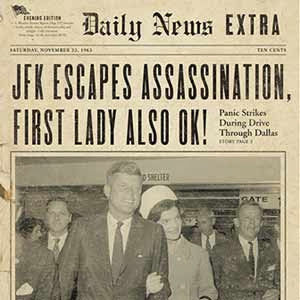 Everybody else is doing this.  I might as well get in on it. Alternate history interests me anyway, and this is one aspect of it that seems to fascinate everybody else — speculation on what the result would have been if Kennedy had survived the assassination attempt. Just try googling:

and you'll get a heap of stuff, all the way from what looks like some Kennedy worship at the Huffington Post to Jeff Greenfield's novel on the subject that I haven't read yet (but which I bet turns out to be more worship). And then of course there's the National Lampoon Fifth Inaugural(which Steve Sailer deconstructs some more HERE.)

So let's start out assuming the simplest thing.  He gets shot at and missed, as in the illustration. He does of course get some sympathy for all this, but he's way ahead of Goldwater anyway, and he coasts to reelection in 1964 — Not with OTL (Our Time Line) LBJ's landslide, but decisive enough. Maybe something like this: 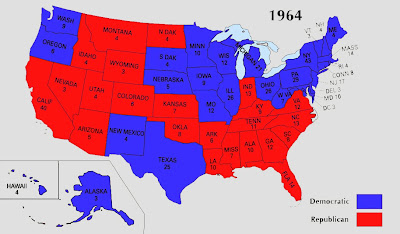 JFK doesn't have any further crises with Russia, but Vietnam proceeds as in OTL, worse, if anything. His tax cut bill stalls in Congress and his civil rights legislation is much feebler than what was passed in OTL. Johnson feels that by helping the ticket carry Texas twice he's fulfilled his obligations, and instead of assisting JFK's legislation, he spends his time getting ready to run himself in 1968. Anticipating blowback from civil rights, he calls for "moderation" in such matters, and positions himself to the right of the administration. Also, rumors of sex scandals tarnish JFK's reputation during his second term, though nothing definite is revealed. Robert Kennedy's "dirty tricks" are revealed in 1965 and he eventually is forced to resign as Attorney General. And, as Pat Buchanan has opined, JFK's second term ends up with the war still a mess, and his reputation in as bad a state as OTL LBJ's or worse. 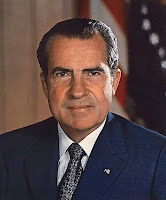 As in OTL, Richard Nixon is nominated in 1968, but his strategy differs. LBJ has already been nominated by the Democrats, and his strategy is clearly to run to the right of the Kennedy Administration, signaled by his choice of Henry Jackson of Washington as his running mate. Nixon responds by deciding to shore up support of moderate Republicans by picking his rival, Nelson Rockefeller, as his running mate. As a result, the Johnson/Jackson ticket regains most of the Southern states lost in 1964, but loses the Northeast, the West Coast, and the election.

The new Nixon administration negotiates an end to the Vietnam war, and also arranges asylum for pro-American Vietnamese in Taiwan and the Philippines, thus avoiding any blowback from excessive refugee numbers in the United States. Nixon strengthens the civil rights legislation passed during the Kennedy administration, but it still falls far short of what was made law in OTL.  Nixon/Rockefeller gains reelection in 1972 over the Democratic ticket of Albert Gore, Sr. and Anthony Imperiale. With the scandals of Robert Kennedy fresh in everybody's mind, Nixon takes care to do everything by the book, and there is no Watergate scandal.

The Nixon Administration has been so successful that Nelson Rockefeller is easily elected President in 1976, despite his controversial selection of Edward Brooke of Massachusetts as his running mate. They win in a close election over the John Connally/William Proxmire ticket. The big crisis of the Rockefeller's administration is the Persian war, set off by an attempted revolution against
the Shah of Iran, which was put down with the assistance of American and British troops. The war spreads into Afghanistan and drags on until Rockefeller's death in 1979 of a heart attack.

President Brooke, upon taking the oath of office, announces that he intends to carry out the programs and principles of the Nixon/Rockefeller Republican party, and ensure victory in Iran. But with the death of the Shah later that year, the war becomes extremely unpopular, and Brooke only narrowly achieves nomination on the 5th ballot, in 1980, picking his chief rival for the nomination, conservative Republican Philip Crane of Illinois, as his running mate. But his attempt to balance the ticket falls short, and he's defeated for reelection by the Democratic team of John Connally and Richard Lamm, who pledge to end the Persian War quickly and honorably. 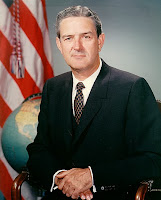 Indeed, Connally's first act as President is to announce peace talks with the Iranian rebels to be held in Bombay. In exchange for guarantees of economic aid, the new Iranian regime pledges to hold elections that do not include
Marxist candidates, and to sign a mutual-defense treaty with the United States, Britain, and Afghanistan to oppose any Russian aggression.

This is both an accomplishment for the United States and a failure for the Soviet Union, which finds itself decisively cut off from influence in Iran and Afghanistan. This leads to the fall of communist governments in Eastern Europe, and, with the death of Leonid Brezhnev in 1982, Andre Gromyko comes to power and institutes a defensive foreign policy and a series of internal reforms, that results in the dissolution of the USSR by his death in 1989. 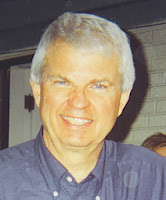 President Connally gets credit for the decline of Soviet power, and is reelected in a landslide over the Republican ticket of Arlen Specter and Donald Rumsfeld in 1984. With the further crumbling of the Soviet Union, Vice-President Lamm is easily elected in 1988.  His running mate is Senator Norman Swartzkopf of Florida, veteran of the Persian War. They defeat the Republican ticket of Pete du Pont and Jim Thompson of Illinois. 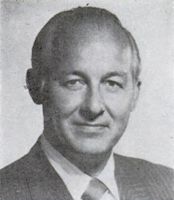 President Lamm and Vice-President Swartzkopf both died in the 1990 bombing of the G7 Summit Meeting in Houston, Texas, which also took the lives of Prime Minister Brian Mulroney of Canada and US Secretary of State Jeane Kirkpatrick. Bob Michel, Republican Speaker of the House, was sworn in as President and announced that he would serve as "Acting President" and would not be a candidate for President in 1992. President Michel's presidency was dominated by the investigation of the bombing, which was linked ultimately to an Iranian dissident group.

Reeling from the deaths of three of their most prominent members, the Democratic Party nominates former New York Mayor Ed Koch for President in 1992, and he picks California Senator Jerry Brown as his
running mate.  The Republicans nominate former VP candidate Jim Thompson of Illinois for President and he chooses Pennsylvania Senator (and daughter of former President Nixon)  Julie

Eisenhower as his running mate. The Thompson/Eisenhower team wins handily.

In 1996, the Thompson/Eisenhower ticket easily defeats the Democratic team of Mario Cuomo and Sam Nunn.

In the 2000 election, the Republicans nominate the popular Julie Eisenhower for President, and Jake Garn of Utah for Vice President. Democrats choose Sam Nunn and former Chicago Mayor Richard M. Daley. The Republicans win by a landslide.

In 2004, for the first time since 1908, the Republicans win a fourth straight race for the White House, when the Eisenhower/Garn team defeats Bob Graham of Florida and Richard Perry of Texas.

In 2008, Vice President Garn announces that he will not seek nomination for President, and he and President Eisenhower both endorse California Governor Michael Huffington, who is nominated and chooses Governor Robert Taft of Ohio as his VP candidate.  The Republican streak is broken, however, as the Democrats choose Richard Perry of Texas and Michael Bloomberg of New York, who win easily. 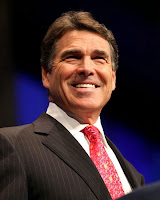 In 2012, the Republicans nominate Charles Frank Bolden, Jr., Governor of South Carolina, for President and Gordon Smith of Oregon for Vice President, but they narrowly lose to the Perry/Bloomberg ticket.

This was a quick job, done off the top of my head.  Do point out any blunders and send suggestions to make this more plausible. 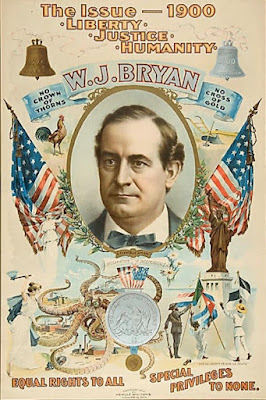 This site has become moribund, so I'm going to issue a challenge in the form of a what-if: Suppose this:

How does this change WWI, WWII and the rest of history up to our time?

Let's say there will be two categories to judge your responses — Most believable or plausible, and most imaginative/entertaining.
Posted by Baloo at 10:45 AM No comments: