POD=point of departure. What historical event changed to result in this situation in 1947? 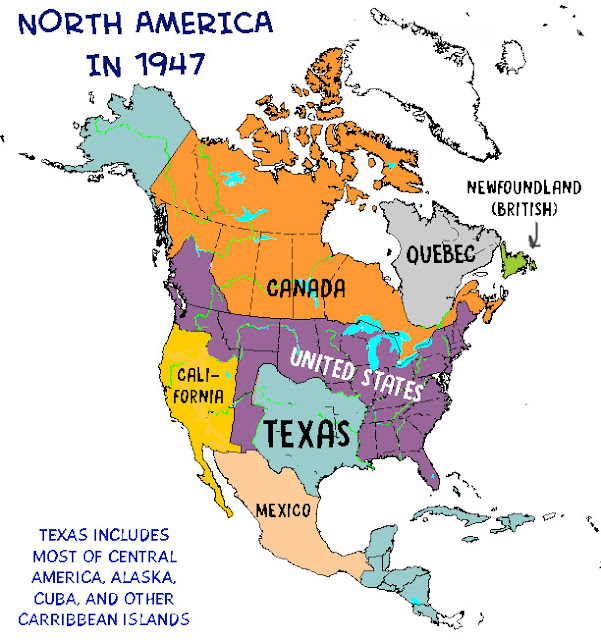 It wouldn't take much change for Nixon to have won in 1960. A gaffe on the part of Kennedy, perhaps, or rumors of his promiscuous sexual behavior (which we now know to be true), gaining traction. But I like the idea of Rockefeller agreeing to become his VP, which he turned down in our timeline. That might give Nixon New York and one other, maybe New Jersey, and the presidency. So let's see where this takes us:

This is an oddity from Breitbart [link] that intrigues me. Before Trump got into the race for the nomination, my first choice for President was indeed Jeff Sessions, largely because he's a hawk on immigration, and also because of his generally conservative orientation, with a populist bias. Actually, that sounds a lot like Trump, doesn't it? That explains his choice of Sessions for Attorney General. But I think it less likely that Sessions would have beaten Hillary, had he been nominated. After all, we've just witnessed some downright political genius on the part of Trump, using liberal tactics against liberals, hitting back harder when he's hit, and using technology to make an end run around the hostile press.

But if somehow he had been elected, Sessions would indeed make a great President. Read on:

A Look Back at the Remarkable Presidency of Jeff Sessions 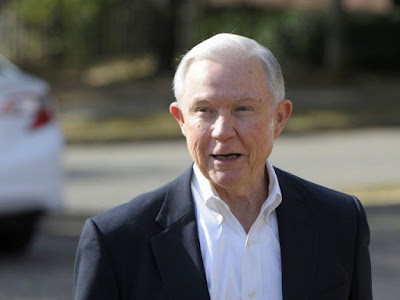 
In the just-completed 2024 presidential election, the Republican Party has won the White House for a third consecutive time—only the third instance in a century that the GOP has managed this feat.
So it’s worth pausing over the origins and causes of this political achievement—this Republican “triple play.” In particular, we might ask: What additional political force has given the GOP this newfound political muscle? After all, from 1992 to 2012, the GOP had lost four of six presidential elections—and five of six in the popular vote. And yet the Republican presidential victories of 2016, 2020, and 2024 cannot be denied: Even the Main Stream Media are now willing to concede that GOP strength is more than just “a blip.”
In fact, if we examine these Republican win streaks, we can identify some commonalities. In each instance, we can see that one political figure stands as decisive in building the Republican Party’s national strength. Way back in the 1920s, the key force for the GOP was President Calvin Coolidge, who inherited the wreckage of Warren G. Harding’s presidency in 1923 and won big in his own right in the 1924 election. In office, Coolidge was so popular that he bequeathed a strong Republican majority to his successor in 1928.
In the next GOP win streak, in the 1980s, the Republican main man was President Ronald Reagan. In the 1980 and 1984 presidential elections, the Gipper was the big winner, and his popularity helped George H.W. Bush win another thumping victory in 1988.
And most recently, in the Teens and Twenties, the undeniable architect of sustained Republican success was the 45th President, Jefferson Beauregard Sessions III of Alabama. His victory over Hillary Clinton in 2016 was relatively close, and yet his re-election in 2020 was a landslide. And as we have just seen, President Sessions’ continued popularity made it easy for his anointed successor to hold the White House in 2024.
So yes, over the last eight years, President Sessions has indeed consolidated a new Republican majority. In particular, we can identify three pillars of strength:
First, by virtue of his long service to the Republican Party, he held the Republican base.
Second, by virtue of his strong stance on key issues of principle, he solidified the support of Tea Partiers and Constitutionalists. Crucially, he recaptured the allegiance of the United States Independence Party, the group of disaffected Republicans that had split from the GOP over the immigration issue.
Third, by virtue of his populist appeal, Sessions brought over a great many centrist Democrats, who were dissatisfied with former President Barack Obama but nevertheless fearful of most Republicans. Wits of the time said that Sessions was a “gateway drug” for wandering Democrats.
During the Obama years, Sessions, then in the US Senate, stood out. He was a solid conservative vote on virtually all issues, from taxes to guns to Life, yet nevertheless he took bold positions on immigration and globalization that jolted the open-borders libertarian hegemony that then prevailed within the GOP. As he said repeatedly, a truck driver is just as important as a billionaire. That is, protecting the jobs of ordinary Americans were just as much a priority as protecting the profits for venture capitalists. Indeed, Sessions showed his Southern spunk: He wasn’t afraid to mix it up with liberal Democratic billionaires. Ideological purists were horrified; ordinary Americans were delighted: Finally, someone in Washington was willing to fight for them.
Sessions thus pointed the way to a new and powerful kind of politics with broad national appeal: It was sometimes called “populism,” although others preferred to call it “Middle Class Conservatism.” For his part, Sessions eschewed labels; to him it was just common sense.
Yet by whatever name, Sessions’ brand of politics proved wildly popular in his home state of Alabama; in 2014, he was the only US Senator, in either party, who was unopposed for re-election. Moreover, Sessions’ message resonated to a larger audience than just the Yellowhammer State. His staunch opposition to Obama’s amnesties of 2014, 2015, and 2016 made him a national hero. Indeed, he was admired by many Democrats who could see that the rising tide of illegals flooding into the country was jeopardizing not only their wages at work but also their safety at home.
Thus Sessions emerged as an important national figure. And yet as we remember, during the Obama years, he was not only not generally seen as a future president, but he himself actively swatted down rumors that he might throw his hat in the ring.
Still, the presidential speculation about Sessions continued. In those years, GOP strategists were hungry for victory; after all, the Party had lost the 2008 and 2012 presidential elections by wide margins. Notably, Republican politicos knew all too well that their candidates in ’08 and ’12 had virtually no appeal to swing voters. And so many Republican thinkers came to believe that that a more populist message could bring disaffected Democrats—of the type who had once voted for Ronald Reagan—back into the Republican fold.
Read the rest here:
http://www.breitbart.com/big-government/2015/01/08/a-look-back-at-the-remarkable-presidency-of-jeff-sessions-2/
Posted by Baloo at 7:23 AM No comments:

SJW's Everywhere! Even in Alternate History! 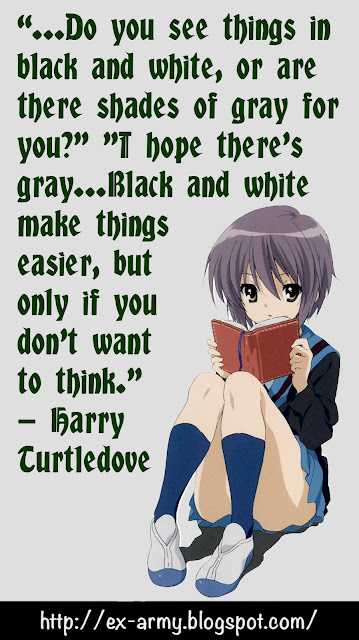 This is a reprint from
http://ex-army.blogspot.com

You never know where you're going to find delicate SJW snowflakes. I'm still surprised when they pop up in unexpected places, though by now I shouldn't be. Half the team that does this blog has an oddball interest in alternate history science fiction, the sort of thing Harry Turtledove writes, and a classical example of which is The Man in the High Castle [link].  This has led him to have another blog, Ifnicity [link], all about alternate history.

There's an alternate history discussion forum on the net at "Alternate History Dot Com" [link]. And he finally got around to registering there to participate in some of the discussions. After registering, one of the first threads he came across was the question, "Are there any right wingers anywhere!?." (meaning on the forum) Some people had answered already, saying they were conservatives, talking about right-wingers as a different classification than conservatives, stuff like that, mostly very mild. So he answered the question this way:

Neither "right-winger" nor "conservative" has widely agreed-upon definitions. Both terms should be defined whenever they're used, especially in forums like this, that include people of many different places and with very different experiences. Me, you can call Alt-Right (I was Alt-Right before Hillary popularized the phrase) or "libertarian nationalist" (google it) in that I believe in libertarian principles about the way the Founding Fathers did, and that I think the nation-state is the best guardian of these principles and its inhabitants. Another way to look at it is that I'm the sort of Goldwater "conservative" that was the default conservative before the Trotskyites left the Democratic party, joined the Republican party, and began calling themselves "neoconservatives."

And guess what happened next? One of the SJW's on the forum wrote:

Oh look it's a brand new member starting off by announcing he's a racist.Banned.

And I naturally expected this just to be the reaction of one of the more childish members, but no, I received an email right away, reading:

[Y]ou have been permanently banned in response to your message Are there any right wingers anywhere!?.

Whoa! Amazing that they, or anybody else, can find "racism" in that paragraph I wrote. Maybe you can enlighten me. Is it the Alt-Right part? Reference to "libertarian nationalist" or maybe even the "Founding Fathers"? The identification as a "Goldwater conservative"? Or the Trotsky part?

Well, if any of you are interested in alternate history, and join that forum, for God's sake don't mention to them that you ever voted for or supported anybody but the most orthodox of leftist Democrats. Better yet, go to Ifnicity [link] and do your alternate-history discussing there. http://www.alternatehistory.com is a cybernetic "safe place," I suppose.
----------------
Quibcag: Since this is about thinking, I used Yuki Nagato of The Melancholy of Haruhi Suzumiya (涼宮ハルヒの憂鬱 Suzumiya Haruhi no Yūutsu)  to illustrate it, because she looks very brainy and very cute at the same time.
Posted by Baloo at 11:10 AM No comments: