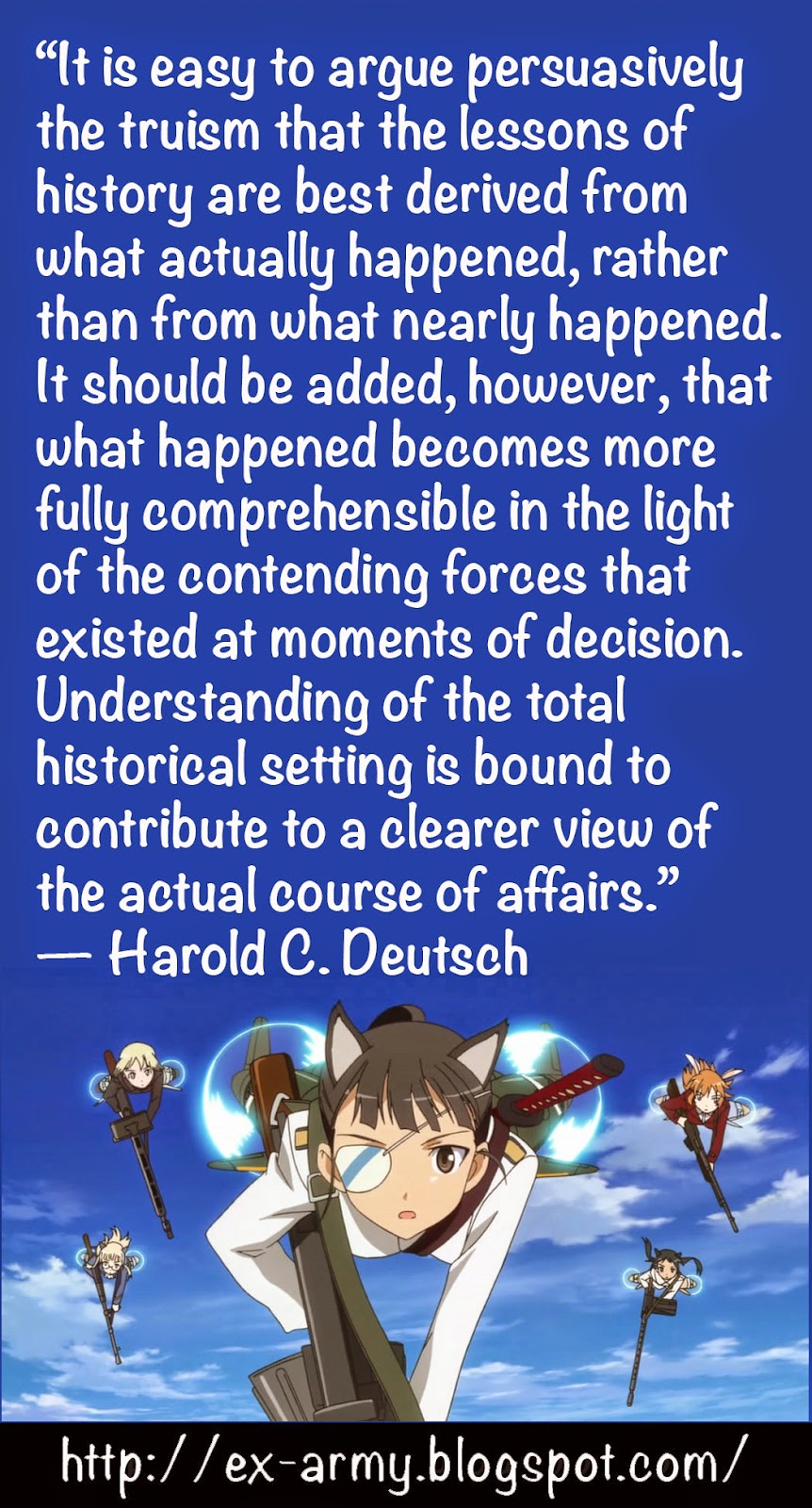 This is the sort of thing that makes us think. Just what is the purpose of alternate history? This is from Stuart Schneiderman's blog, Had Enough Therapy:

Why Bother With Counterfactuals?

In certain precincts it’s an article of faith that the American invasion of Iraq was a complete and total mistake.

And yet, how does anyone know what Saddam Hussein would have done and what Iraq would look like if we had not invaded.

Then again, do we know, to a certainty, what Iraq would look like today if, say John McCain had won the 2008 presidential election?

Speculations of this order are not, strictly speaking, historical research. History is what happened. These counterfactual speculations are about what might have happened.

Some historians have made a career out of conjuring counterfactuals. Other historians find it all to be an exercise in futility.

At the least, they point out, the number of variables make it nearly impossible to know what would have happened, for example, if Theodore Roosevelt had won the 1912 presidential election.

Counterfactual history is based on a philosophical premise. It assumes that human actions direct or influence the outcome of historical events. It militates against the notion of historical inevitability.

Recently, some wags have been saying that ISIS will implode because of its own internal contradictions or because people cannot long stand to be oppressed by tyrants.

If you, like them, believe in an inevitable outcome you will advise the president against doing anything to counter the ISIS insurgency in Syria and Iraq. Why waste resources on a situation that will eventually resolve itself in our favor?

Then again, even if ISIS will inevitably fail, how many people will be raped and murdered in the meantime?

Some of its defenders consider counterfactual history an antidote to the Hegelian and Marxist view of the inevitability of history. Hegel and Marx believed that human history was an unfolding narrative whose main events and even conclusions were inevitable.

Theirs was a narrative driven theory of history. They saw history following a script and they believed that the script would determine the one true outcome.

If, however, you believe that history is like a game, then the outcome is not predetermined. Different moves by different people change the game and change thee outcome.

Moreover, the players in the game are endowed, as I and others have put it, with free will. For my views, see my book: The Last Psychoanalyst.

Reviewing a book on the subject by one Richard Evans, Cass Sunsteinsummarizes both sides of the argument:

In Evans’s telling, many of the contemporary counterfactualists seek to respond to Marxist historians, to suggest that impersonal forces are overrated, and to demonstrate the importance of human agency and free will. Indeed, Ferguson saw his collection as a “necessary antidote” to historical determinism, which was his particular target. In Ferguson’s words, the “reality of history ... is that the end is unknown at the beginning of the journey: there are no rails leading predictably into the future, no timetables with  destinations set out in black and white.” Ferguson seemed to suggest that once we reject determinism, and see that decisions were contingent and might have produced counterfactuals, we can better illuminate the past.

Of course, once we are talking about possibilities, we cannot limit ourselves to what might have happened in the past. We are also interested in what might happen in the future.

If you are formulating policy you do well to consider the different possible outcomes of different policy proposals. Such work does require some imagination, but the materials that imagination will be configuring are facts about the game, the players and the moving parts.

Sunstein notes that such a method applies to some scientific experiments. Even if experiments are not always very useful or very practical when making policy, sometimes they are.

They might hypothesize, for example, that if people have to pay a small tax for plastic bags at convenience stores, they will use fewer plastic bags. To test hypotheses, social scientists usually like to conduct randomized controlled trials, allowing them to isolate the effects of the tax. Such trials create parallel worlds and hence alternative histories—one with the tax and one without it. Historians cannot conduct randomized controlled trials, because history is run only once. Yet they nonetheless develop hypotheses, and they attempt to evaluate them by reference to the evidence.
Of course, these experiments, especially in social science, often fail to include all the data. If people use fewer plastic shopping bags they will likely use more burlap or hemp bags. As it happens, reusable shopping bags breed bacteria that cause ill health and thus drive up the cost of medical care… etc. You will have saved the earth and nature, but at the cost of more disease. Bacteria are part of nature, too.

This does not discredit the enterprise. It says that in some circumstances, especially policy making, one needs to be skeptical about the results of narrowly focused experiments. Most especially, in the social sciences. One should be even more skeptical of those who want to make government policy based on test results that are anything but absolutely true.
--------
The illustration is a "quibcag," which you'll know about if you read the Ex-Army blog. It depicts characters from the alternate history anime, Strike Witches (ストライクウィッチーズ Sutoraiku Witchīzu).
Posted by Baloo at 2:27 PM No comments:

If Reagan Had Picked Rumsfeld as His Vice President, Would We Never Have Had President Clinton? 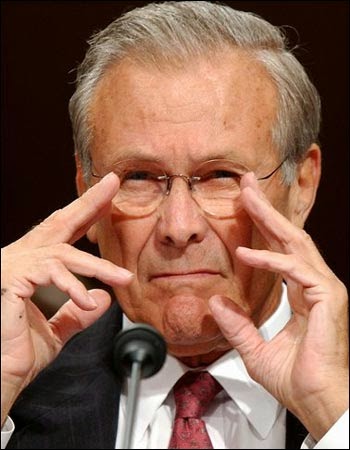 This is a reprint from http://ex-army.blogspot.com/

I think I found this link at Dailykenn.com, but in any case, it's a fascinating question, asked over at National Review Online. Go there and give it a read, and then I'll give my reaction.....

If Reagan Had Picked Rumsfeld as His Vice President, Would We Never Have Had President Clinton?
-------
My reaction is maybe. Clearly, Rumsfeld would have been a good choice for Reagan. His resume wasn't as good as Bush's, but his credentials were solid. I doubt that he would have ever been perceived as wishy-washy as Bush was, and I'm virtually certain he would not have picked Dan Quayle as his VP. My guess it that it would have been either Jack Kemp or Howard Baker. Let's say Baker to add a Southerner to the ticket. He would certainly have won over Dukakis, for the same reasons that Bush did.

And, assuming that Gulf War I would have happened as it did, and the Soviet collapse had done so as well, I expect Rumsfeld would have been much better at taking credit for both, and would not have been challenged for the nomination by Pat Buchanan, changing the 1992 from a downer to an upper for Rumsfeld. Likewise, a Perot candidacy very well might not have taken place.  Now, with Baker on the Repubican ticket, Clinton would most likely not have picked Gore as his running mate, and would have gone with, say Jerry Brown, and regretted it. My guess is that the election would have been closer than in our history, but that Rumsfeld would have beaten Clinton and served a second term.

9-11 would have happened as it did in our time, but instead of Gulf War II, Cuomo would have responded in a more piecemeal fashion, accomplishing as much as Bush did, but not being perceived as well. This would have resulted in Fred Thompson-Rudy Giuliani beating a Bob Kerrey-Evan Bayh ticket in 2004 and being reelected in 2008 against Dick Durbin and John Edwards.

And in 2012, Rudy Giuliani, running with Mitt Romney, would have beaten the Democratic ticket of Chuck Schumer and Ken Salazar and he'd be President right now.

No Clintons, no Obamas.

Now, it's your turn. Pick this to pieces.
------------
NOTE!  A commenter interpreted this post as my saying that Rumsfeld would have been a good President. NO NO NO!  He would have been a terrible President, at least as bad as Bush the First. This is just an alternate history speculation about what would have followed if he had been President. Me, I wanted Pat Buchanan to be President.
Posted by Baloo at 10:11 AM No comments: